Do Ferrets Get Along With Dogs? 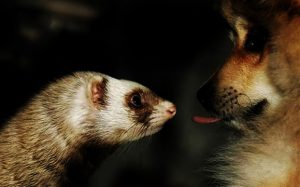 Do Dogs Get Along with Ferrets?

If you have ever had more than one dog, cat, ferret…you know that each has his own unique personality. Just like people, even sisters from the same “litter” have different personalities.

Ferrets and dogs, just like other animals (and people) have different personalities. One dog might be best buddies with one ferret and ignore another.

Ferrets view everything, every person and every animal as a potential playmate. As a fun-loving animal, ferrets above all love to play. When ferrets play they give it their all–there’s no holding back!

However, a ferret may see another animal, such as a dog, as an enemy or something to fear. If a ferret is afraid or feels trapped, she will defend herself. Ferrets are often fearless. A jealous and brave ferret may even act aggressively toward a dog if you aren’t giving her enough attention.

A Dog’s Point of View

Dogs are hunters–some more than others. Terriers, Retrievers, Spaniels, and other sporting/hunting dogs are more attuned to their hunting instincts than Chihuahuas and Pomeranians. But again, it all depends on the personality of the dog. Some dogs love to chase balls, squirrels, and rabbits. Others could care less.

Of course, dogs do get jealous. They expect to get all your attention. They don’t want to share you with another dog, let along with another type of animal. If a dog gets jealous, he may attack the ferret. A ferret has little chance against a dog that wants to hurt her. 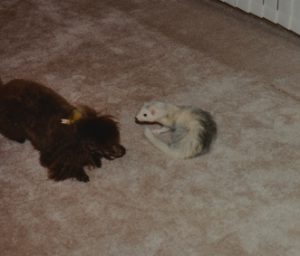 I had a friend who had a border collie mix named Elizabeth. She was the sweetest, friendliest dog. She loved to play and she loved to chase–everything! My friend went away to college for a semester and got a ferret named Fiona. Then she moved back home with the ferret.

Elizabeth was fixated on Fiona. She lay there for hours watching Fiona–even when she was sleeping. Of course, Fiona soon got bored when she realized nothing else was happening. Elizabeth was not interested in anything but the ferret. She didn’t want to play or go for a walk. She even ate quickly and returned to her post.

Everyone was worried that the hunting instinct was triggered in Elizabeth. But the next day they were carefully introduced face to face without the cage in between. Elizabeth didn’t know what to do, she was so excited. She and Fiona started playing right away and have been best friends ever since! 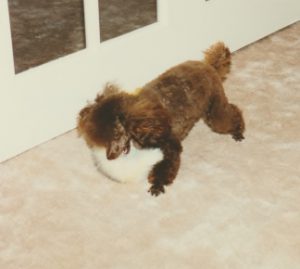 My personal experience was a bit different. I had 2 ferrets, Panda and Tigger. About a year later I got a poodle puppy, Truffles. They couldn’t care less about one another! They pretty much ignored each other.

Another year later, I got another ferret, Prancer. That’s when things got interesting! Prancer was young and playful and wanted to play with everyone–including Truffles. For whatever reason, Truffles showed some interest in Prancer. After a while, they even started playing! Prancer would jump on Truffles’s back and then fall off as Truffles whipped around to play. They didn’t play often or for long, but it was so much fun to watch.

I have heard of people who have not had such positive experiences with dogs and ferrets, however. Sometimes a ferret and a dog have to be kept separated. Some dogs just can’t get passed their instinct to hunt.

First impressions are important. It can be possible to have a house full of different species that get along, it all starts with introductions.

It’s important to introduce your dog and ferret gradually. It is best to have two people–one to hold the dog and one to hold the ferret. It’s important to be relaxed. If you are nervous, your dog will pick up on it and may think there is a threat. Allow them to smell each other while providing encouragement and reassurance. Your dog may be unpredictable, so be sure you have control of him and ready to act quickly.

Ferrets like to harass each other and other animals.  They enjoy nipping at their feet or tails and running underneath them and grabbing them by the neck or tummy and hanging on. Or, like Prancer, jump on their back! These ferret games often alarm the unsuspecting target.

Attentive supervision is mandatory. What begins as play or indifference can quickly turn to aggression. It’s important to be able to read and understand your dog’s and your ferret’s body language.  No matter how well your pets seem to get along, be sure to continue to provide supervision when they are together. For more information on understanding ferret language, see this article.

Personal Space
To help ease the introduction of a new family member to your home, make sure your ferret has her own safe place. An appropriate cage with hammocks, bedding, litter box, toys, food, and water makes a safe haven for a ferret to retreat to. A sturdy cage may also prevent a dog from reaching the ferret inside. Because you want all ferret and dog interactions to be supervised, keeping your ferret safe in her cage is important when you are not there.

A Harmonious Home
Most ferrets find dogs interesting playmates. But even dogs who find ferrets fun playmates can become annoyed because sometimes ferrets just don’t know when to stop!

Dogs and ferrets can become best buddies, but it is important to be especially cautious with toys and food. Ferrets love to help themselves to the dog’s food. Many dogs are very protective of their food. An otherwise easy-going dog can become threatening if he thinks someone is after his dinner. Plus, dog foods do not have proper nutrition for ferrets. Be sure to feed your dog away from your ferret. Ferrets also like to steal dog toys. Many dogs act the same way with their toys as with their food. If your dog is possessive of his toys, make sure they are out of reach when your ferret is running about. Also, some dog toys are not safe for ferrets. Be sure your dog toys are also good ferret toys if your ferret has access to them.

It definitely depends on the dog. The dog’s personality and hunting instinct are the biggest factors. Ferrets generally get along with everyone and everything. With the proper supervised introductions and patience, your ferret and dog may be able to cohabitate under one roof. They may even become best friends!