Ferrets speak with their voices and speak with their bodies. They use many different types of communication—from body language to vocalizations to crazy behaviors. Knowing what they are trying to say to you is important to help you respond appropriately to what they are communicating. Understanding ferret language helps you better care for your ferret and helps you both have more rewarding interactions.

Ferret language: What is My Ferret Trying to Say?

Ferrets are generally quiet little critters–especially since they sleep so much! But during playtime, they can really be quite talkative! People who don’t understand ferret-talk can become a bit uneasy when hearing a ferret make one of its adorable sounds.

The most common type of  ferret language is dooking. It is also referred to as clucking, chuckling or chattering. This is a happy, excited sound that always brings a smile. Whenever I hear a ferret dooking, I have to mimic back! If you are ever feeling down, encourage your ferret to dook. It’s practically guaranteed to lift your spirits!

The opposite of the dook is the screech. This signals terror. A screech is a high-pitched sound a ferret vocalizes in cases of extreme pain, fear or anger. If you hear your ferret make this sound, you need to jump to her aid. Her tail may be puffed up and her back may be arched. She may be scooting backwards as well.

The bark is sometimes used when a ferret is excited or frightened.  The sound resembles a type of bark and is usually one or two loud chirps.

The hiss is a ferret warning. She may use this form of ferret language when she is annoyed or angry. Often times it results from one ferret bothering another. Depending on the situation, the sound can be long bursts or short spats. Even though she’s not happy at the time, it’s a cute sound and when I hear it, I have to mimic that as well!

Often ferret vocalization is accompanied by corresponding body language. While some of these movements or actions resemble dances, others just seem wacky! 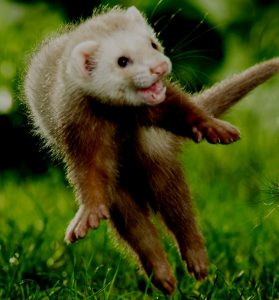 The Drop and Roll

The Hide and Seek

What is she doing?

This is a dance of pure joy! It is spontaneous and unchoreographed. It’s a joy to watch too! It can be a solo act or done with one or more partners. The ferret energetically moves in all directions–sometimes at the same time. She may jump  forward, backward and sideways–often with all four feet off the floor. She may be singing along with her mouth wide open, to music only ferrets can hear.

Not a dance of joy, the War Dance is done when a ferret is angry or fearful. His back will arch, his tail may bush out and he may hiss–often while backing up. Although he may back away, it is a warning to the object of his disagreement.

When ferrets are excited, due to happiness, anger or fear, their tails frizz out to look like a bottlebrush.  Sometimes, a ferret’s entire body gets frizzy. It is important to notice other signs to determine if it’s a happy frizz or something else.

The Drop and Roll

When you have more than one ferret, one will assume the alpha role. When ferrets play, this alpha will often grab another ferret and flip him on his back or side. They will then roll around in mock fights, which may appear quite aggressive.  One may even let out a screech, but it is all in fun (unless the screeching continues). Ferrets have thick skin, so their sharp teeth and claws used during the Drop and Roll are generally not harmful.

Sometimes, a ferret may find your foot or hand as the opponent is this game. This should not be encouraged. You don’t want your ferret biting you, even if just in play. One of my ferrets, Chantile, loved to sneak under the covers and attack my foot. Not fun! The thin skin on feet is nothing like tough ferret skin.

The Hide and Seek

Ferrets love to hide. We are the ones who have to seek! Ferrets will explore every nook and cranny they can get into. When they find a place that looks interesting, they will try to make themselves fit into it–no matter how small.  It is surprising what small spaces they can squeeze into. They sure aren’t claustrophobic!  That’s why ferret- proofing your home is so important. You want to make sure she can’t get to things or get into things that are dangerous for her. 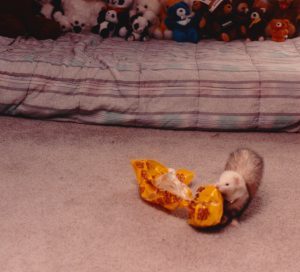 Ferrets are little thieves! Anything can be a target. When they find something that catches their attention, they will often take it to their treasure chest–a place where they store all their legal and illegal possessions. Two of my ferrets decided that inside the box spring was a great place to store treasures. So they dug several holes in the thin fabric under the bed. When I moved the bed about a year later, dozens of things fell out–toys, small empty plastic containers and caps, a CD case…

They are hoarders, so this behavior can be repeated over and over, as long as there are items of interest around–which can be almost anything to a ferret. You may think an item is too big or heavy for a ferret to carry off, but you may be surprised. What they can’t lift up and carry, they may drag or push along. So if you see your ferret going back and forth from one place to another, watch her to see what she is carrying off with her. That’s another reason why ferret- proofing is so important.

Ferrets love to play chase. They also love to race, and usually win! They may entice you into the game, or you can instigate a chase or a race by starting to play with your ferret and getting him in the mood for fun. Then, run away. He’ll usually be right behind you. Sometimes a ferret will choose the wrong playmate to play chase. Most dogs and cats don’t like to play this game with ferrets and can become aggressive toward the ferret when annoyed.

Similar to cats, ferrets sometimes stalk. This is a form of play. She will crouch down and remain very still and then pounce! Her prey may be a fellow ferret, a family cat or dog or even a toy.

Although not very common, some ferrets do wag their tails. This is often due to excitement. But it can also happen when a ferret is upset. You need to look for other body language or vocalization to determine if it is a happy wag or not so happy wag. It is more often seen in young ferrets.

Digging is a natural behavior for ferrets, thus the long sharp claws. The most common places you will find a ferret digging are cage corners, litter boxes, potted plants and carpeting. One of my ferrets, Panda, would sometimes get shut in the bedroom accidentally.  Even if she was happily napping or playing previously, as soon as the door was shut, she had to have it open. Since she couldn’t open the door, her solution was to dig her way out. She would frantically dig at the carpet under the door until someone opened it. As soon as the door was open, she was satisfied and moved on to something else.

Ferrets sometimes get obsessed with an object–usually a toy. He will treat it with extra care and not let anyone have it. He may take it to a favorite hiding spot to keep it safe. He may hiss at you when you get too close to his prized possession. If he sees you trying to take it away, he may follow you and not leave you along until you give it back. He may then put it in a different hiding place, so you can’t find it.

So there you have it. Learning  ferret language is not hard, it just takes some careful observation. Once you know what your ferret is trying to tell you, you can avoid a lot of the miscommunication that can occur between ferret lovers and ferrets. You both can enjoy a much fuller and more rewarding relationship!