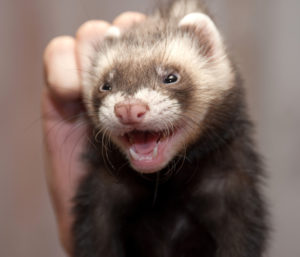 Why Should You Brush Your Ferret’s Teeth?

Dental disease.  More and more it has been determined, that like people, pets need dental care to prevent dental disease and to keep them healthy overall.  Brushing a dog’s teeth has been recommended by Vets for a long time. As this has become common practice, Vets have been recommending dental care for other pets as well–including ferrets.

Dental disease in ferrets, as well as in other pets and in people, starts with gingivitis. Gingivitis is an inflammation of the gums. This inflammation is caused by bacteria that live in the mouth and invade the pockets surrounding the teeth. Untreated, gingivitis can progress to periodontitis, a disease involving the teeth and gum pockets. Eventually, these oral bacteria also invade the bloodstream and can cause infections in the kidneys and even the heart valves. The severity of gingivitis is partly determined by the strength of the ferret’s immune system. It occurs in middle-aged to older ferrets. Periodontal disease, luckily, is uncommon in ferrets.

Causes of Gingivitis and Periodontal Disease in Ferrets

Plaque accumulation is one of the main causes of gingivitis and periodontal disease in ferrets. If you haven’t been brushing your ferret’s teeth, plaque and tartar are sure to build up.

The good news in regard to gingivitis is that it’s usually reversible.

Treatment of Gingivitis and Periodontal Disease in Ferrets

A little prevention can save your ferret the stress and potential danger of being anesthetized and you can save yourself the cost of the procedure as well as the stress.

I must confess that, throughout all the years of having ferrets in my family, only recently have I realized the importance of regular dental care.  A fellow ferret parent I know almost lost her ferret due to accumulated dental problems. Her ferret was not eating as much as usual and she became concerned. She took him to the Vet and was told that her ferret had several infected teeth that would need to be removed and he would then need to take antibiotics to treat the infection. He was an older ferret and had some other health problems, making putting him under anesthesia even more of a risk. After the procedure, he didn’t start waking up as he should have. It started to look like he may not wake up at all. Thankfully, he eventually did, but it was quite a scare and a wake-up call. 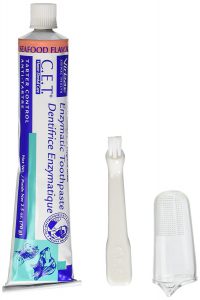 There are small pet toothbrushes and small finger brushes that fit on the tip of your fingers made for cats which can also work for ferrets. There are flavored pet toothpastes, such as  CET Pet Toothpaste, that comes in malt flavor–a favorite of many ferrets. There are tooth sprays and gels, such as PurBreath No Brush Complete Oral Care Gel. But first, you have to get your ferret used to having her mouth handled! Since ferrets won’t naturally allow you to put your fingers or a toothbrush in their mouths, you will have to ease your ferret into the tooth brushing process.

You can’t expect your ferret to open her mouth and allow you to do what you want in it. You need to get her used to you playing around her mouth in a non-stressful way.

You will find it much easier if you scruff your ferret and rest her body down the inside of your forearm. She will be supported by your arm and unable to move around.

Start by rubbing your ferret’s cheeks and mouth for about 10-20 seconds several times a day for a few days.  Once your ferret becomes more familiar with this interaction you may begin to rub her teeth and gums to get her used to your fingers in her mouth and to get her ready for the brushing.  As she becomes more familiar with this stage, allow her to taste the toothpaste you plan to use. Be sure to only use pet toothpaste–NEVER USE TOOTHPASTE FOR HUMANS! It can make your ferret very sick. Eventually, you should be able to incorporate the toothbrush with the toothpaste and begin to brush your ferret’s teeth. 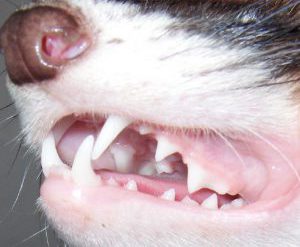 In the early phases of gingivitis, plaque and tartar are present and there is a mild redness of the gums. Other common signs of gingivitis and periodontal disease include:

The gums are a good indicator of your ferret’s overall health. Healthy gums are pink, smooth and moist. If they look white, bluish or grayish, contact your Vet as soon as possible, as this can be a sign that your ferret may be suffering from one of several diseases. If the gums are very red, it may be a sign of dental disease. Also, look to see if she has any broken or chipped teeth. Chipped and broken teeth are quite common in ferrets. It is usually the upper fangs that get broken. Many ferrets have a habit of grasping cage bars or doors in their mouths and pulling back forcefully. If your ferret does have a chipped or broken tooth, you should make an appointment with your veterinarian to see if the root of the tooth has been exposed. Sometimes, teeth simply wear down to the roots from aggressive chewing.

You can find a great selection of pet dental products, here.