Are There Different Types of Ferrets?

With that said, according to the American Ferret Association, there are 8 basic colors recognized in ferrets.

In addition to overall color, individual ferrets can have multiple color patterns, so sometimes it is difficult to categorize a ferret’s color pattern.

There are 8 color patterns used to describe ferret coat patterns:

There are 9 basic color patterns recognized in ferrets:

If you are not in The Ferret Show Business, it is often difficult to classify ferrets based on color and pattern. When seasons change and when ferrets get older, it becomes even harder to accurately classify a ferret’s coat. Some ferrets completely change colors–often getting lighter and loosing their markings. Some may get darker or lighter masks or lose their masks altogether. 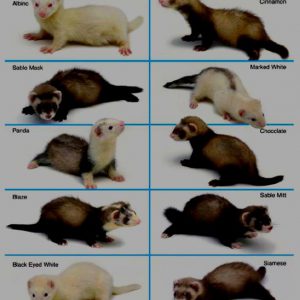 Plus, there are numerous other sub-categories or combinations that have been named, such as:

Are there different types of ferrets?   Well, there are certainly different colored and patterned ferrets. Some look so unlike others that it is easy to believe they must be a different kind. But with as many different color and pattern combinations and variations thereof, there is still the one and only original ferret!

6 thoughts on “Are There Different Types of Ferrets”